HIKING TO BROW PEAK FROM ARROWTOWN

Brow Peak is one of the many peaks overlooking Arrowtown and the surrounding area.

Despite not being a popular walking track in Arrowtown, you can create an awesome Brow Peak Loop Track which is a little under 20km from Arrowtown (or you could make it shorter).

This post will give you all the details about the Brow Peak hike, along with plenty of photos. 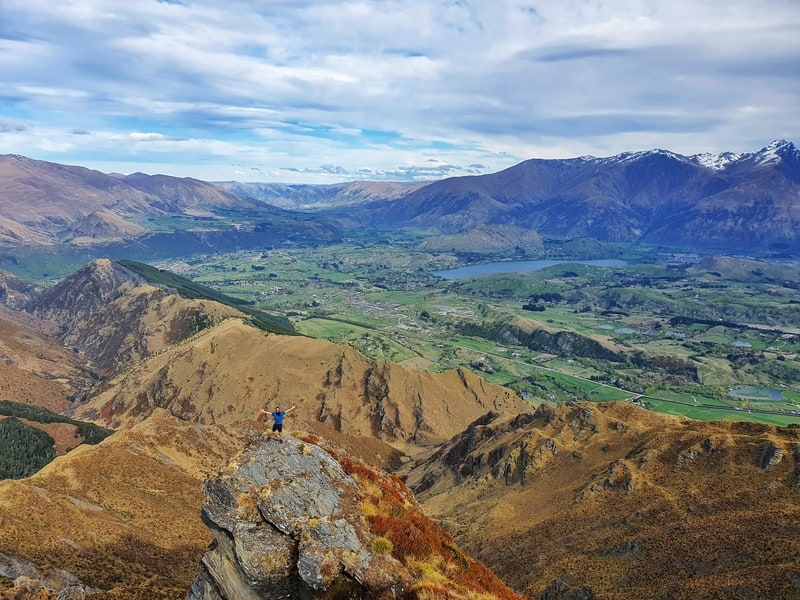 Details | Map | How To Get There | My Experience 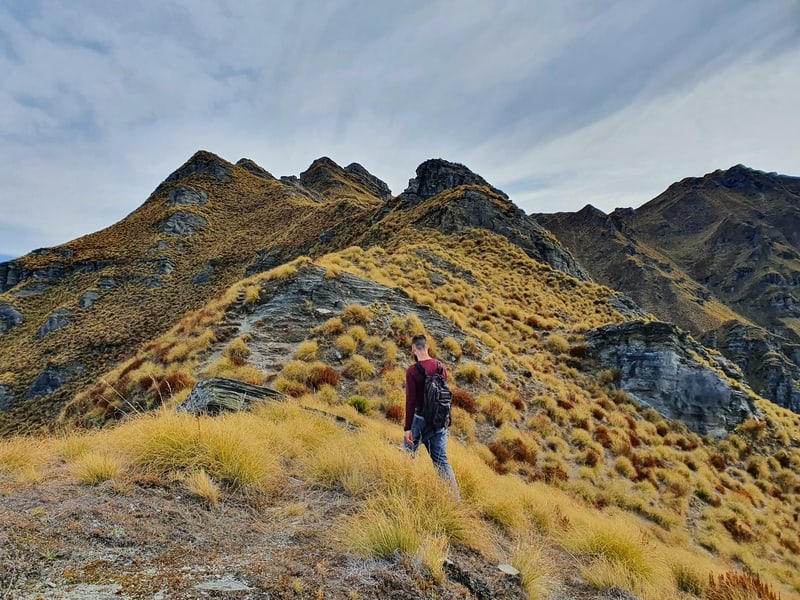 Difficulty2: Medium – Hard. The descent was quite hectic, and the ridgeline has some tricky rocky sections but it’s not crazy crazy. Same on the descent. We were lucky to make the walk on a nice day with minimal wind, that wouldn’t make things easy.

Hike Distance3: My Strava recording came in with 19.27km. This is going to be about spot on as we didn’t venture far off track from the loop we created.

Incline4: Strava measured 1366 metres of elevation gain. It’s hard to know how accurate this is as there were some ups and downs I think Strava missed. But I assume it’s not too far off 🙂

Hike Duration5: It took us 5 hours and 13 minutes to complete the walk. That’s longer than we expected, but it was slow going along the ridge at times. Note: we ran the last 1.5 kilometres as we didn’t want to miss the bus.

You can click on the map above to zoom in and out on a new tab. This is the Strava GPX file overlaid on a topo map.

You can see all of the walking tracks on Maps.me. No luck on Google Maps though.

HOW TO GET THERE

Given the trailhead is in Arrowtown, just make it to Arrowtown which is easy to get to from Queenstown.

You can catch the bus for $2 each way with a Bee Card from Queenstown (timetable here).

If you’re driving from Queenstown, Wanaka, or Cromwell (or beyond), park for free here, next to the unofficial trailhead. 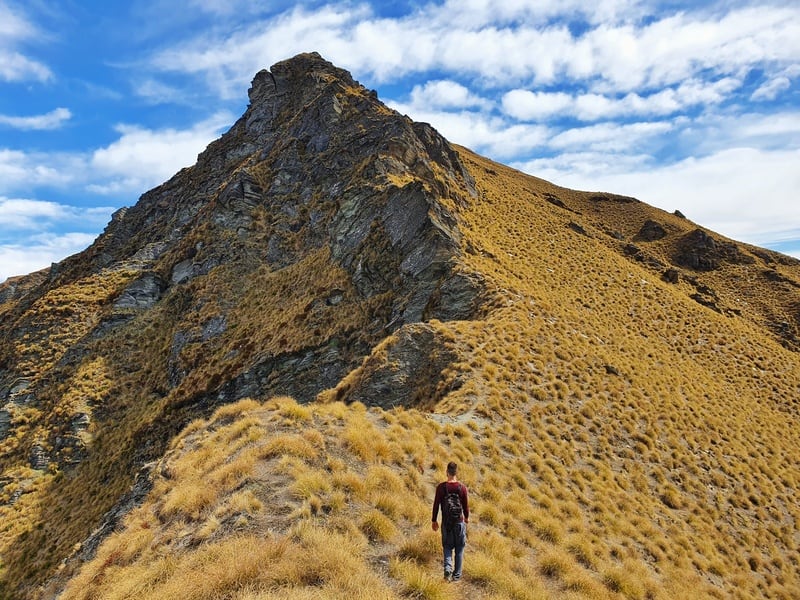 Brow Peak was such an awesome discovery and is the thing to do in Arrowtown I recommend the most.

We had a nice day for the hike, with minimal wind. As there’s no real official route to/from the summit we decided to do a loop via Brow Peak that would have us following the ridgeline towards Coronet Peak before dropping back down to Arrowtown.

We used the X Marks the Spot monument (on Google Maps) as our start point.

The first 1.5km is on the most gentle of upslopes, but from here on out there are very few flat sections. You’ll get to the bridge where you’ve got the option to go along the Bush Creek Track or Sawpit up towards German Hill.

We take the latter option (go right), and this begins a steady ascent up a maintained yet uneven track. It’s definitely a grind, but we’re essentially working hard now to get above the tree level which will give us views wherever you look the rest of the way. 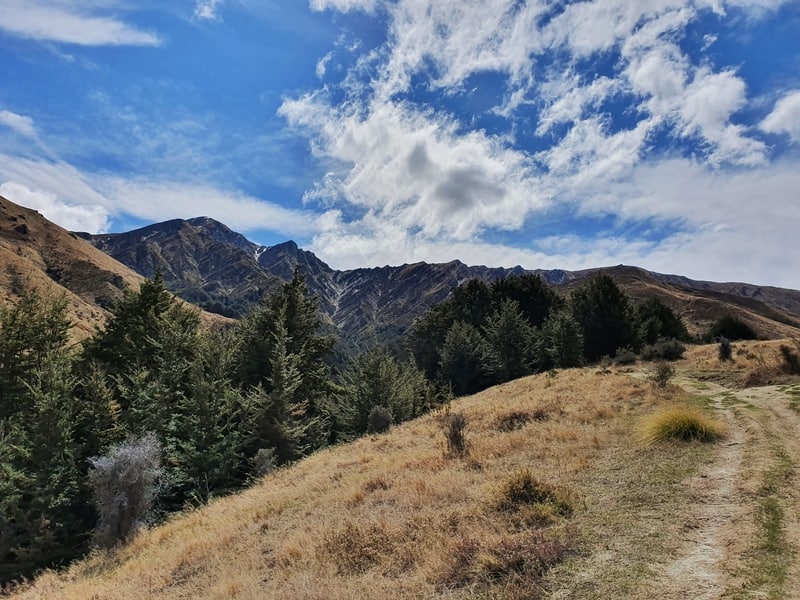 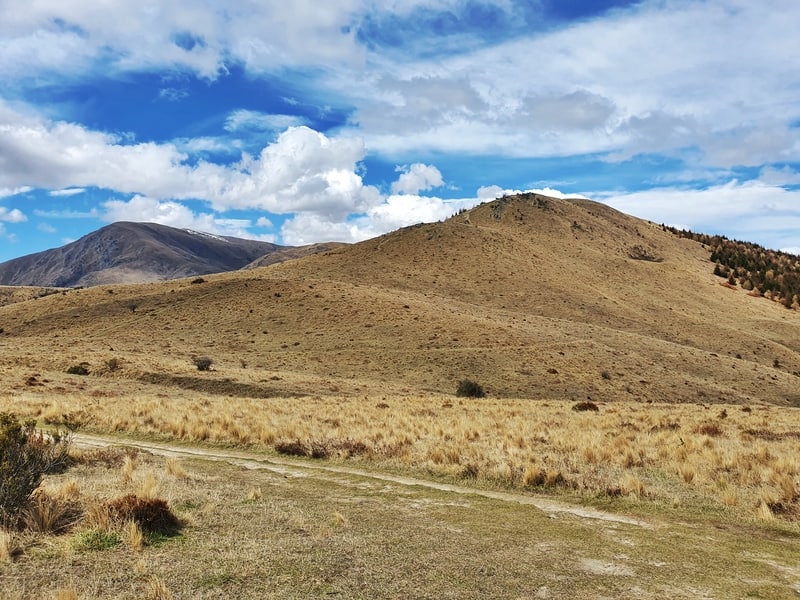 As you emerge from the treeline you’ll get a glimpse of Brow Peak on the left. It looks pretty intimidating. And German Hill on your right.

Continue on the path until you get to the junction where there’s a map of the trails. At the time of writing the map on the sign doesn’t include the one we’ll be taking, so I do recommend downloading maps.me app (offline maps) so you can make sure you’re on track.

At this junction, go left. That’ll take you towards a spur, which finishes just right of Brow Peak from where we’re standing. We are going to be taking this spur the whole way. The maps will say you need to go right, avoiding the spur, heading towards Big Hill. But you should easily see the track going staying on the spur.

It’s not a major track, but it’s pretty hard to miss. And once you’re on it, almost impossible to lose. 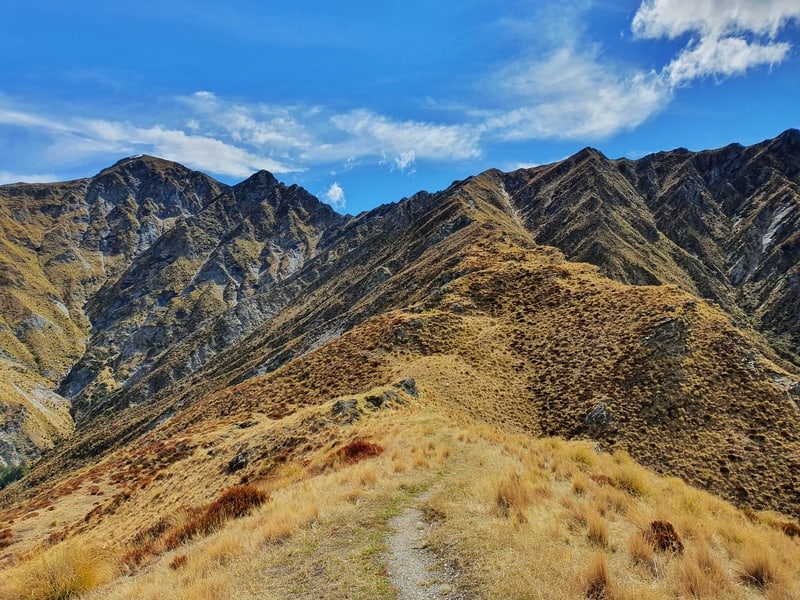 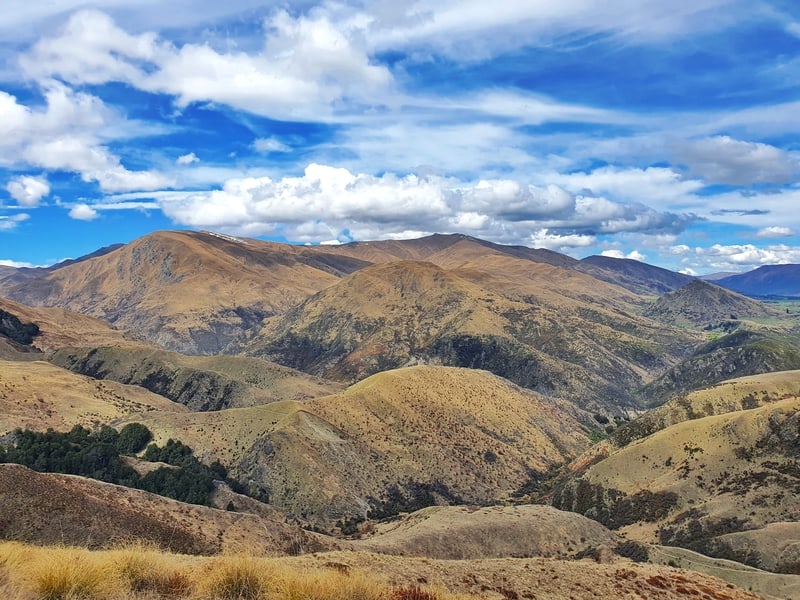 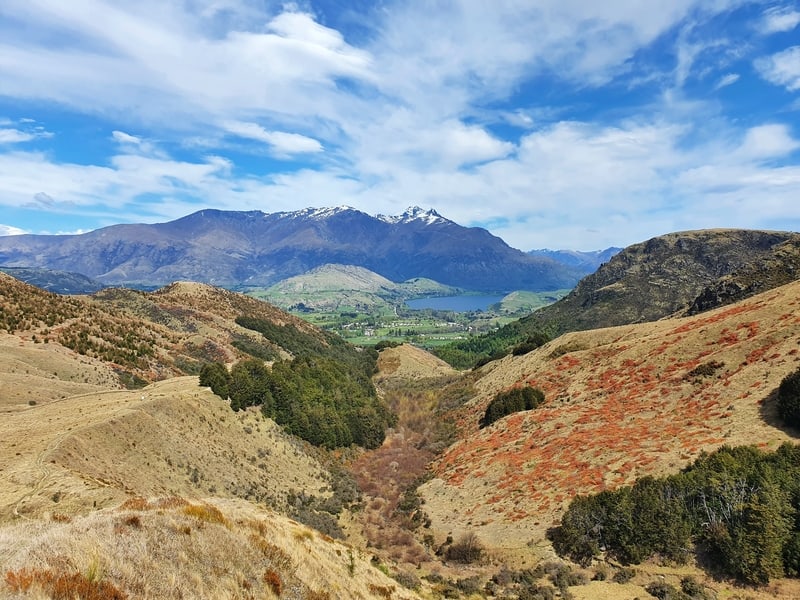 Going up the spur is pretty steep, with nearly 700 metres of elevation gain in 3km. If the weather was windy, I’d imagine this would be quite a wild walk, but we had a nice day with minimal wind and found it easy going.

As you go up, look behind you. Views!

The climb up the spur went faster than we predicted and we made it to the pole at the top of the ridge. If there was snow in the area, things would be a whole lot harder and I would only be going if I had appropriate alpine equipment. 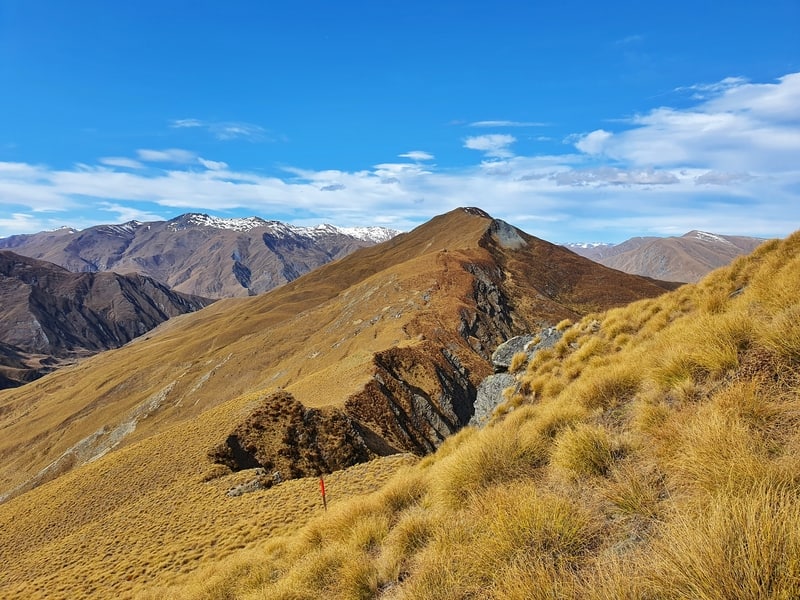 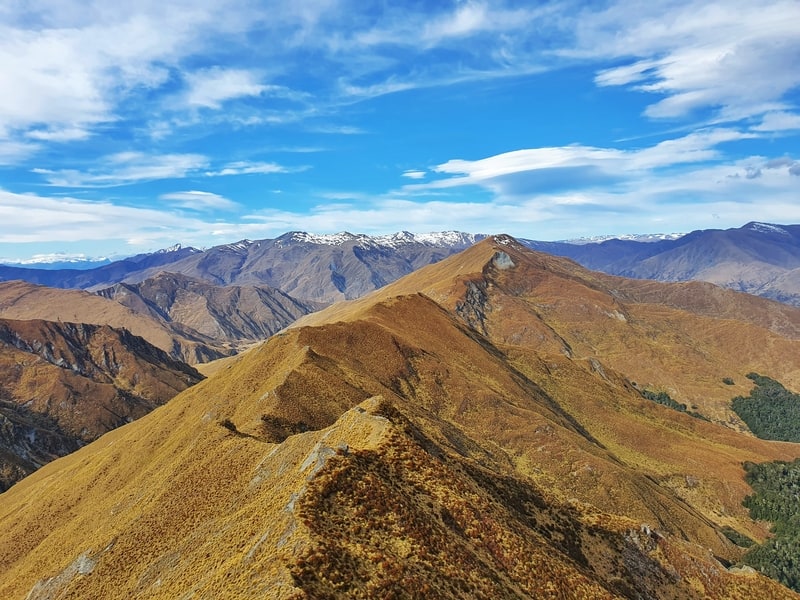 Once we got to the ridge, we turned left for the final stretch to Brow Peak. I wasn’t sure what to expect on the ridge as it almost looks like a knife-edge as you’re going up the spur. But the other side is a steep tussock filled slope, so totally walkable.

You’ve got about 1km to reach Brow Peak along the ridge. The ridgeline is marked with poles, so do your best to get between them as efficiently as possible. There was usually a track, but at times it seemed to disappear with a steep climb to the summit. 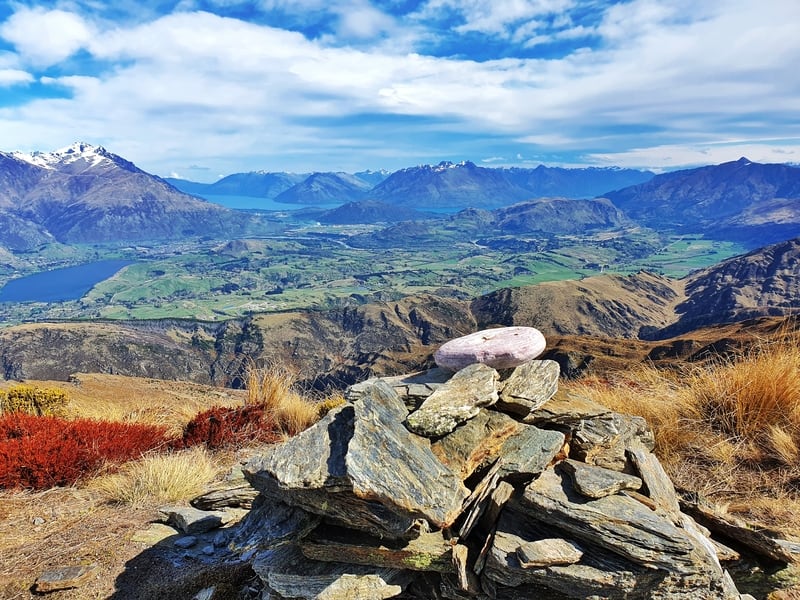 We then made it to the summit of Brow Peak, with a little cairn telling us we’d made it. This is the highest point of the walk, 1456 metres above sea level (for reference Ben Lomond is 1748 metres). 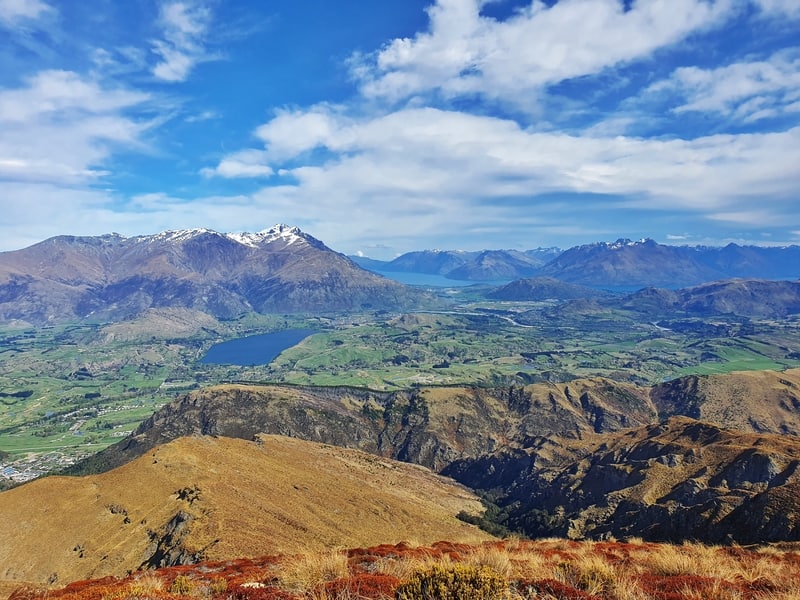 You’ll have seen much of the views from the top of the ridgeline, but you can see:

Once you’ve finished at the summit, you’ve got a choice to make. Keep in mind you’ve walked about 6.2km with over 1000 metres of elevation gain to this point.

You could turn around and come back the way you came, putting the walk in the 12-13km range (you could complete the rest of the Sawpit Gully Track on the way down if you wanted).

Or keep following the ridgeline as we did. Then drop down the hill near Coronet Peak and continuing along the Bush Creek trail to Arrowtown. It’s up to you.

We continued along the ridge thinking things won’t be too hard from here. 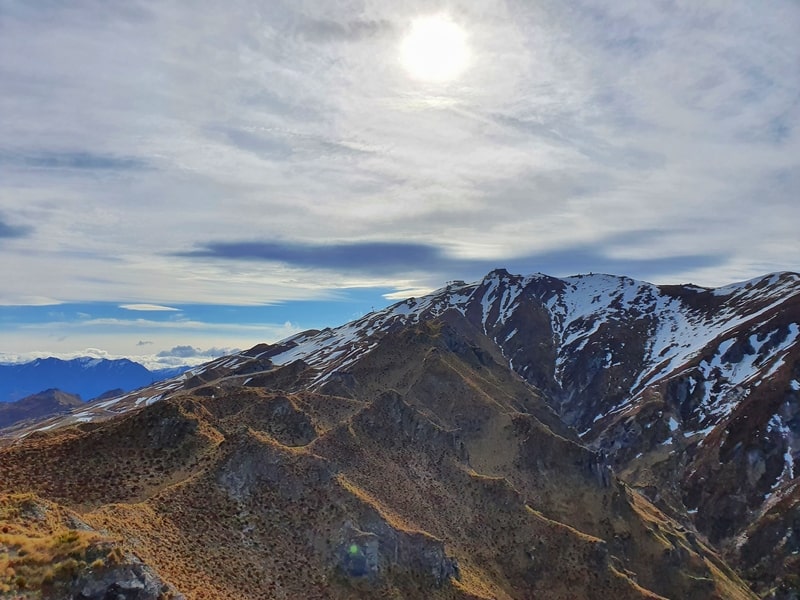 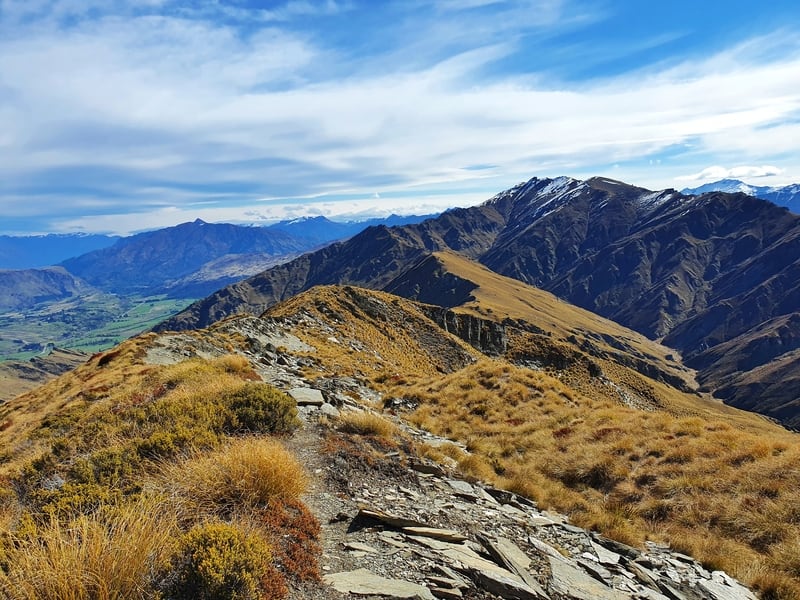 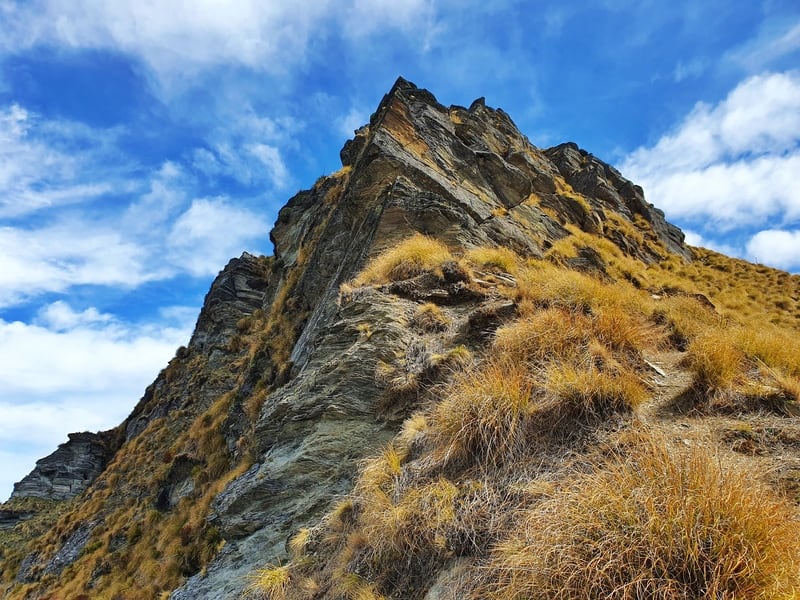 And while most of the time that’s right, some of the pinches along the ridge were steep and slow going. It was a bit demoralising seeing Coronet Peak getting so close but the views. Wow. You can’t argue with them at all (update: I finally did the Coronet Peak hiking trail).

Again, if it was windy, the ridgeline wouldn’t be my favourite place to be. But with minimal wind, it was amazing. 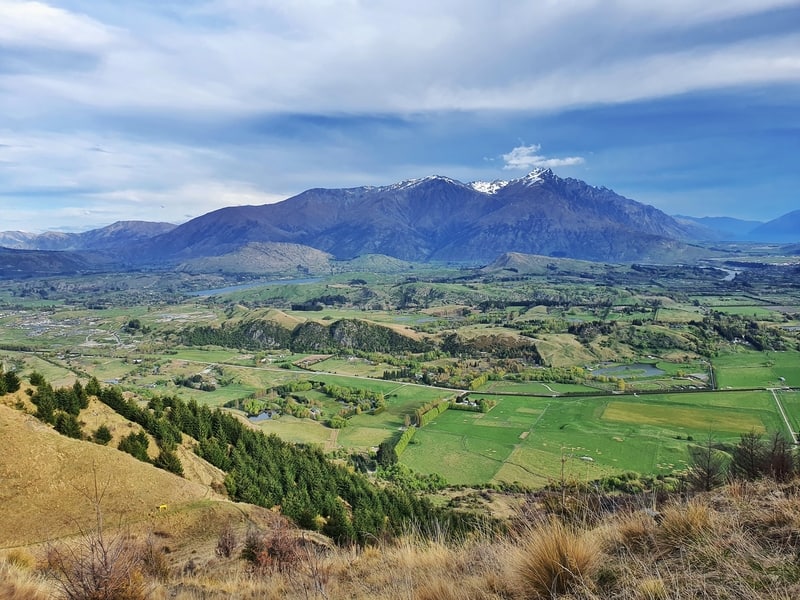 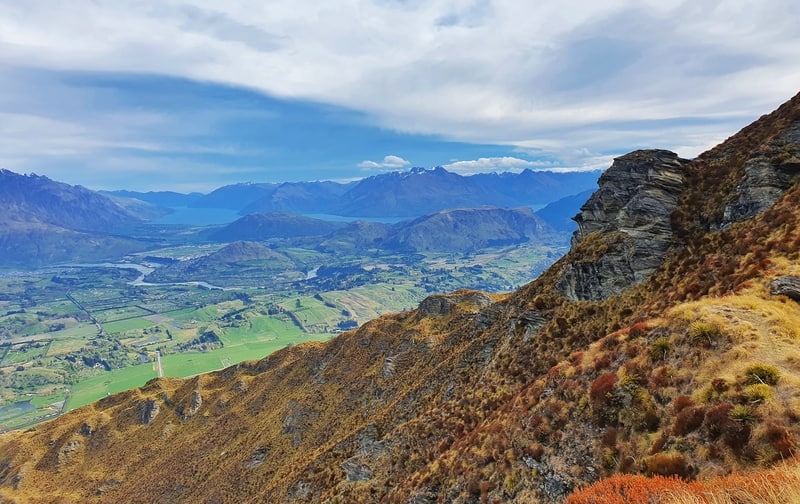 Eventually, we found the track which was going to take us back down the mountain. Every spur kept teasing us, we thought that it must be the next one every time. In total, we walked along the ridge for about 6km.

The descent for the first 2km is quite steep with a rutted track. We didn’t have any falls, but it’s not for the faint-hearted. 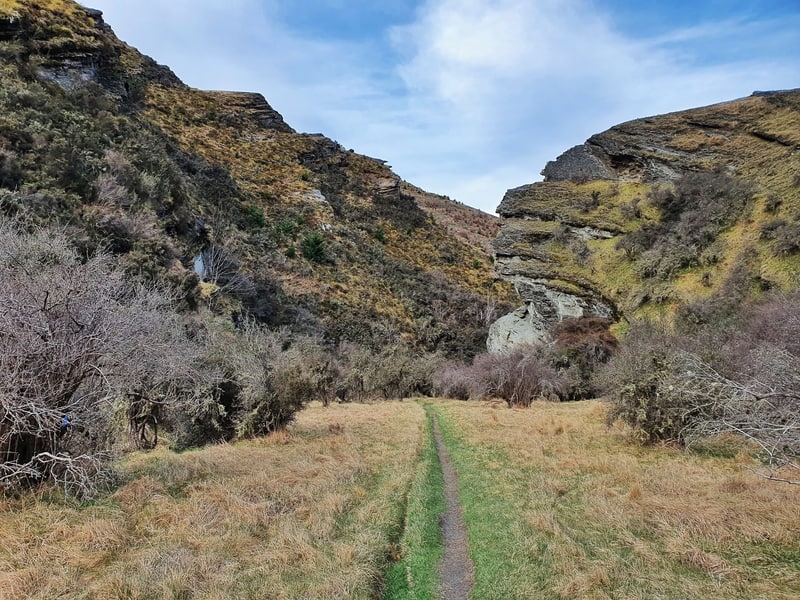 And once you reach the sign for Arrowtown, it’s a gentle descent back to Arrowtown on a single trail. You walk through a valley for most of it following a creek. It might have been because we were a bit tired but it became funny how many times the track and creek crossed over.

A creek which you can jump over most of the time, but I ended up just walking through it the 10 or so times the path crossed the creek.

Once we reached the first junction from earlier on the hike we started to run as we didn’t want to have to wait another one hour for the next bus.

What an awesome ridge! If you love taking dramatic photos when you hike in New Zealand, you’ll love this Brow Peak track. And if you don’t? You’ll probably love it anyway!

It’s a walk that I highly recommend.

I mentioned The Remarkables earlier, you can do an amazing hike up them

A nifty track popular with the locals