10 FUN CARS YOU CAN SEE AT SOUTHWARD CAR MUSEUM

With over 500 vehicles on display, the Southward Car Museum is a hidden gem on the Kapiti Coast.

Sir Len Southward opened the museum in 1979 after his collection of vintage cars got overwhelming and he needed a larger space for them.

The result is the Southward Car Museum whose collection continues to grow.

If you’ve got any interest in cars, you’re going to love it here. Even as a non-car fanatic, I enjoyed seeing the random cars and like me, you’ll be able to relate to various cars in the museum. 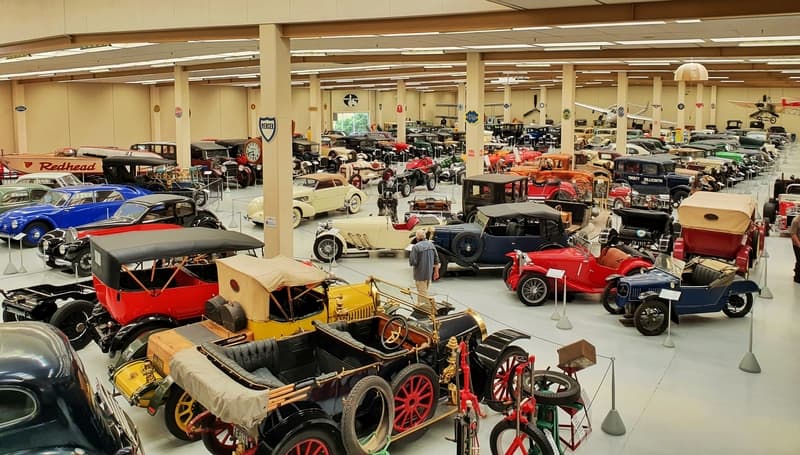 A snap shot of the cars on one of the three floors.

These are 10 of my favourites I came across in the museum.

Note: The descriptions come from the information placard next to each vehicle. If you were to read them all, you’d be here for a whole day. 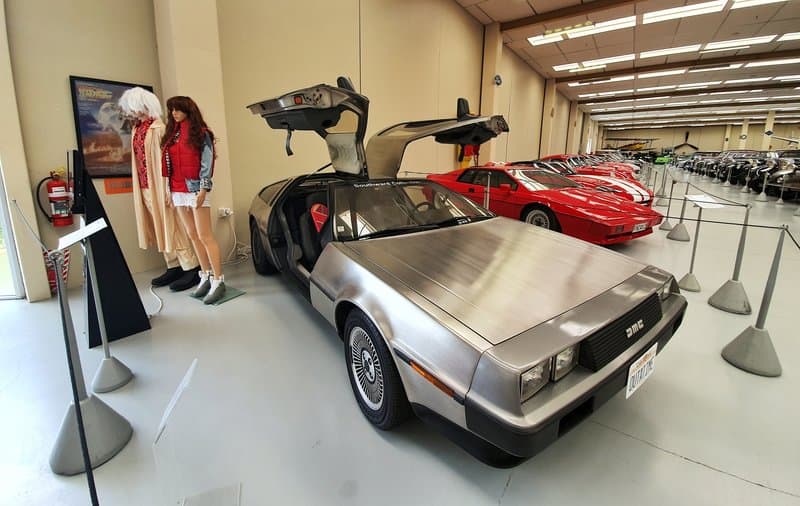 When the DeLorean was released to the public in 1981, the protests between Catholics and Protestants in Northern Ireland were in full swing. This meant the GBP/USD exchange rate was swinging wildly and the cars which were initially going to be $18,000 in the USA suddenly had a price tag of $25,000. The demand for the car was still massive, but cash flow problems were the downfall of the company and the DeLorean Motor Company were put into receivership the next year. If you’re interested, the full story behind the DeLorean Motor Company is worth a read.

Of course, the DeLorean has gained cult status thanks to featuring in the movie, Back to the Future. 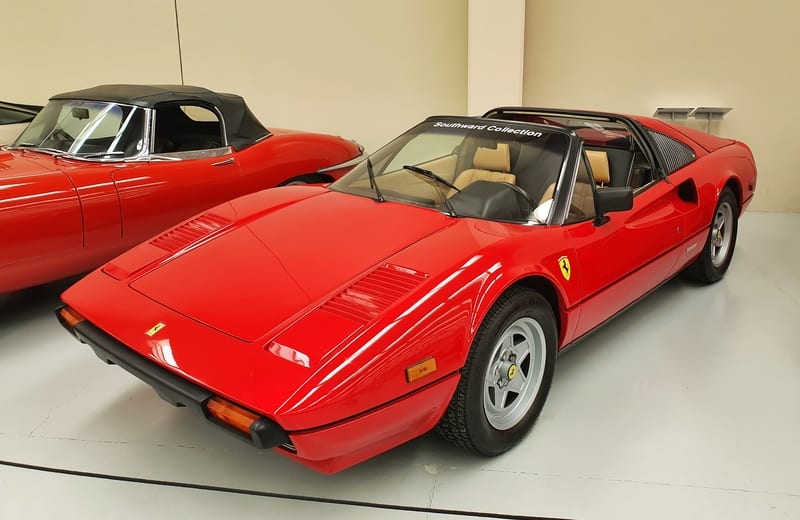 If it’s a red Ferrari, you know it’s going to be sexy. The one you see above? With its mix of curves and wedge-like shape it was a very popular model (1982), with the car playing a lead role in TV series Magnum P.I. 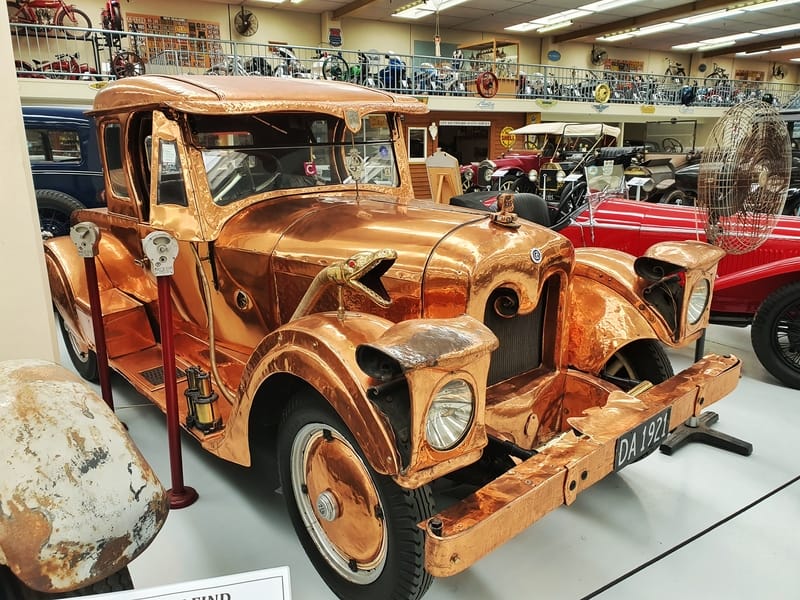 I didn’t realise that the restoration process of a car involved so much work! 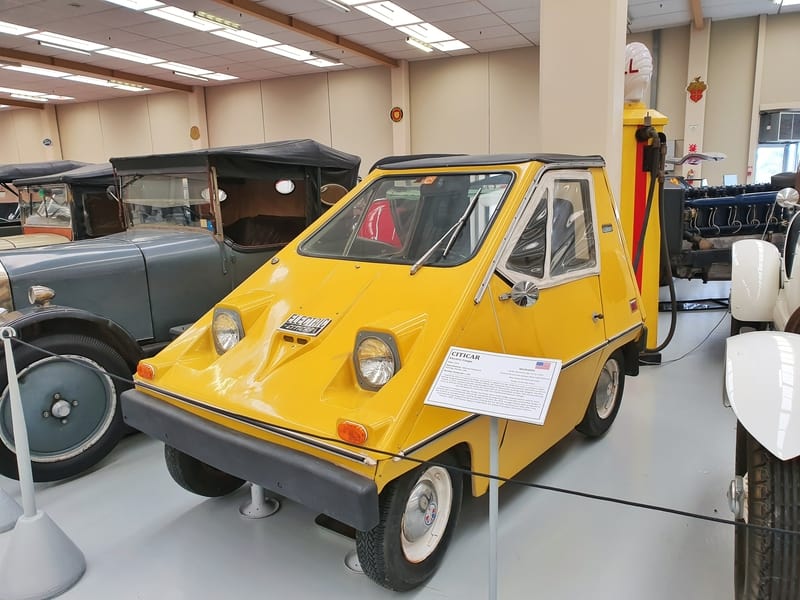 Tesla and their electric cars might be leading the pack today, but they weren’t the first. The CitiCar, released in 1976, was a 100% electric car.

Inspired by the design of the golf cart, it was the 1975 fuel crisis that inspired Sebring-Vanguard to produce the CitiCar. With a max speed of 60km/h, and a range of 70km, the first edition of the CitiCar was as simple as it gets. The car sold well though, and in 1976 Sebring-Vanguard vaulted up the rankings and was the 6th largest US car manufacturer. 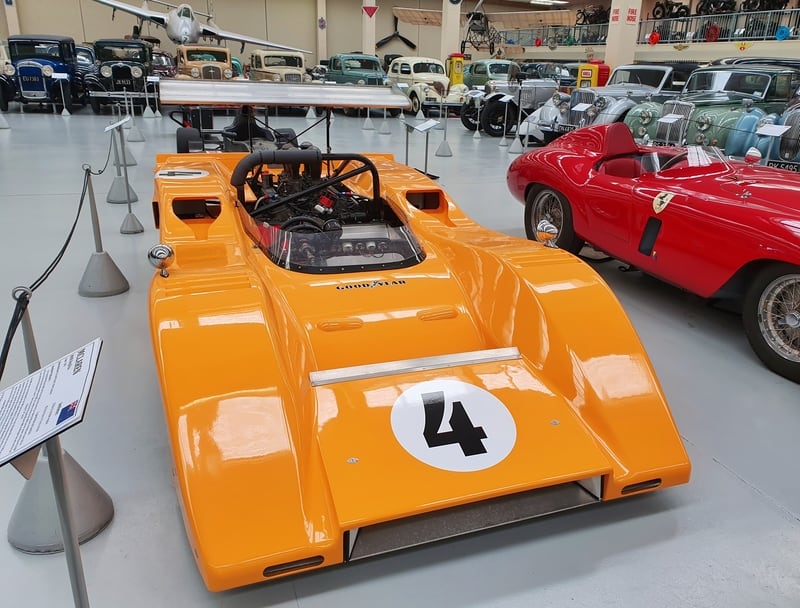 unfortunately, I didn’t take a photo of the information board for this replica of a McLaren, made famous by Kiwi Bruce McLaren. You can get a glimpse of the vehicle in action in this two-minute trailer. 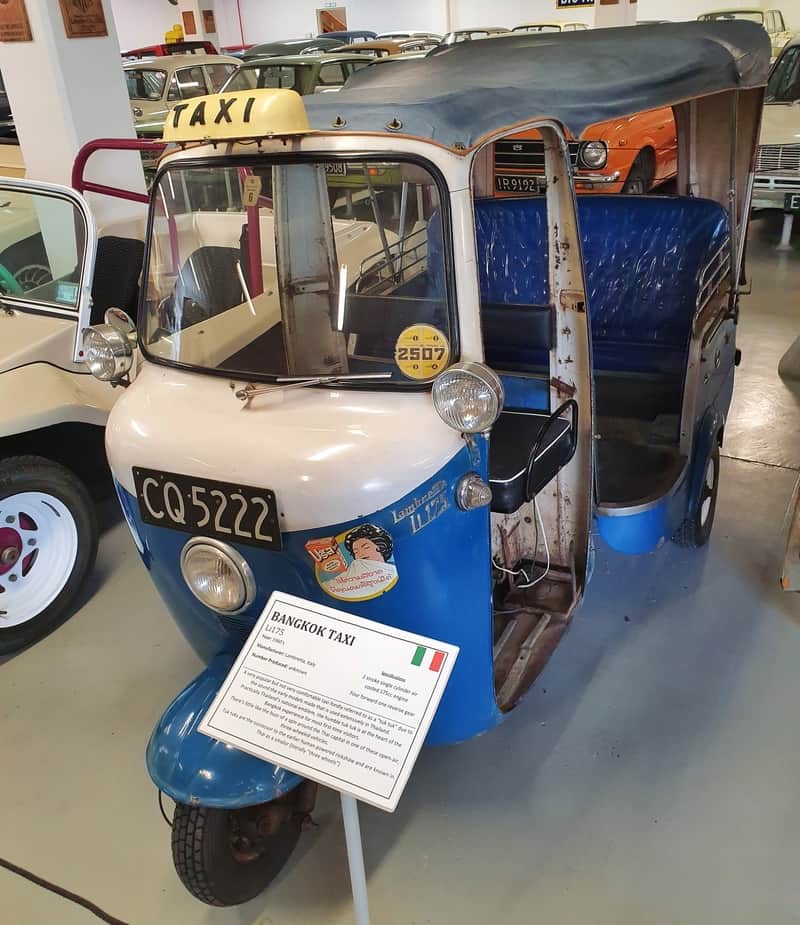 Like the Jeepney below, this vehicle is a worldwide iconic image of the country, in this case, Thailand. The name tuk tuk was coined because that’s how the sound of the early models was described.

As a successor of human-powered rickshaws, every first-time visitor to Bangkok needs to experience a hair raising tuk tuk ride. 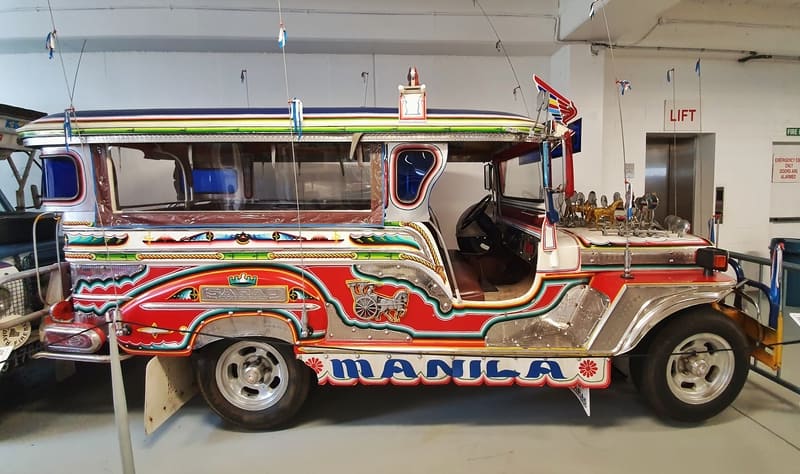 The jeepney is an iconic symbol of Filipino culture with the vehicles used as public transport. They’re based on jeeps from WW2, and before getting their detailed artwork, the vehicle takes 60-90 days to be built from scratch.

If you ever get a chance to visit the Philippines, make sure you take a journey in a Jeepney where you’ll likely need to squeeze up to those next to you. 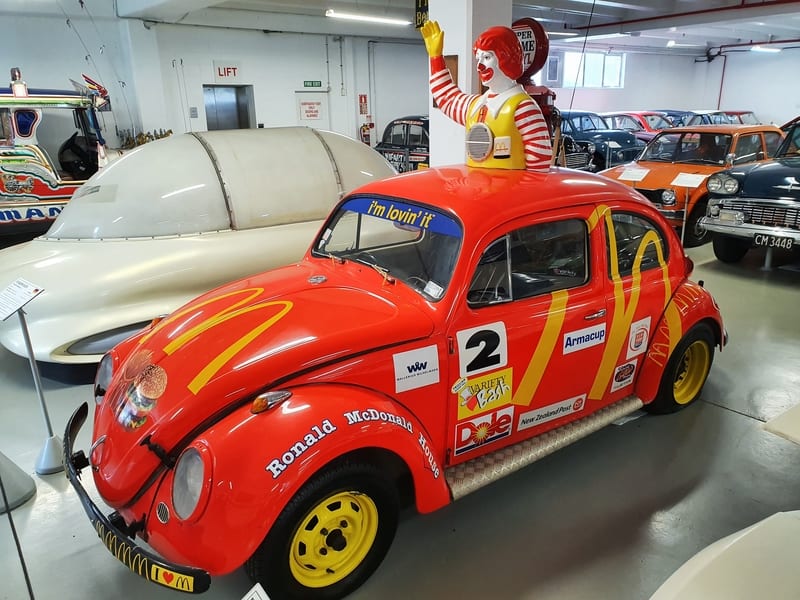 In German, Volkswagen translates to people’s car. The Volkswagen above was seen all over NZ wherever a charity initiative was.

Who came up with the idea of the Volkswagen? Adolf Hitler. Yes, that man. He wanted a cheap and simple car built for those who wanted to use the countries new road system. It’s crazy to think they’ve gone on to produce over 21,000,000 since the request was made. 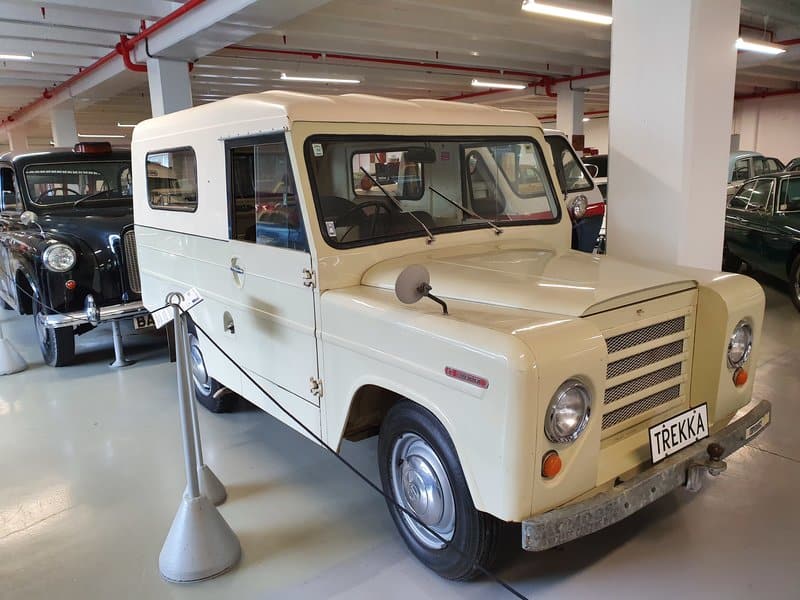 When import restrictions led to the rising cost of imported cars, New Zealand Motor Holdings produced this simple (low-quality) vehicle for those in rural areas and construction. As soon as the import restrictions were relaxed the costs of producing these were too expensive at a limited rate.

To this day, the Trekka is the only vehicle that was produced in NZ as a commercially viable business (for a short period anyway). 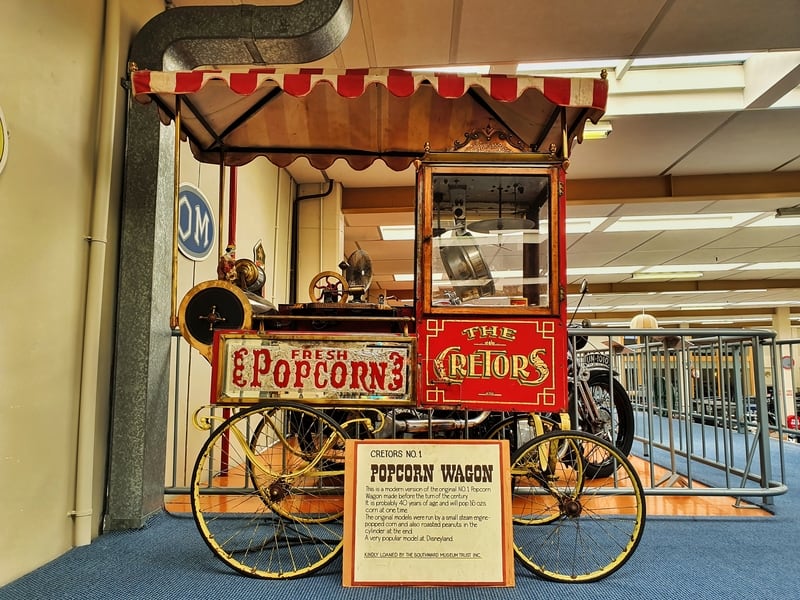 I had to include this as it seemed so random. This model was a top seller before the turn of the century with its ability to pop 16 oz of popcorn at once. Fast forward to today, and you’ll see wagons similar to this popping away at Disneyland.

These are just 10 of the 500+ vehicles you can discover for yourself at Southward Car Museum.

Website: SouthwardCarMuseum.co.nz
Where: Otaihanga Road, Otaihanga, Paraparaumu 5036
Cost: $20 for adults.
Duration: I was in there for about 45 minutes on my last visit. For car junkies, don’t be surprised if you walk out wandering where the last four hours have gone.

Is the Southward Car Museum worth visiting? Initially, I thought it wasn’t as the price seems a bit on the high side. But if you’re not a backpacker on a budget it is. After all, they’ve got to restore the cars and keep the display room tidy which features 500 cars.
I can’t imagine that being easy!

An endless supply of things to do in New Zealand for you, and me.

After visiting the museum, you might want to go and relax on one of these walks.

Facts about New Zealand (with substance)

This post is different, and has some interesting facts about New Zealand that’ll give you insight into the country.